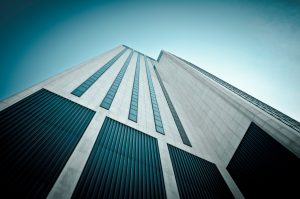 This is my fourth post about making godly choices, all based on Jesus’ wilderness temptation. The below thoughts come from his second test (Matt 4:5-7).

Then the devil took him to the … highest point of the temple. “If you are the Son of God,” he said, “throw yourself down. For it is written: ‘He will command his angels concerning you, and they will lift you up in their hands, so that you will not strike your foot against a stone.’” Jesus answered him, “It is also written: ‘Do not put the Lord your God to the test.’”

Sometimes you do have a choice in the matter, but you need to ask yourself, “Who or what is playing the major role in how I decide?” Later in Jesus’ ministry and in defense of his actions, he gave his accusers this answer: “The Son can do nothing by himself; he can do only what he sees his Father doing, because whatever the Father does the Son also does.” That is, Jesus always followed God’s leadership in his life, even when it wasn’t pleasant or initially promising. But doing so, for us, is tricky because of two influences: our humanity, the devil’s temptations. Let me explain.[tweet_dis]As human beings, we subconsciously believe and act towards what we earnestly desire[/tweet_dis], but our passions change as we mature. In addition, as Christians, we also determine our future steps based on what we think is pleasing to God; most of us realize that this includes a life of obedience and trust. However, the tempter, who understands this same thing, is proficient at proposing an avenue that appears spiritual but is really the wrong way forward.

Both of the above two influences are in play in Jesus’ second test, as the devil encouraged him to take a blind leap of faith with the promise that he’d joyfully land in a safe place. Who wouldn’t feel the pressure, when in a similar setting as Jesus, to jump from a situation that is unpleasant and easily labeled as “from the devil” towards a new place that promises a dwelling “under the shadow of the Almighty”? And especially so, when the suggestion is that such a giant, blind leap of faith would demonstrate our humility, spirituality, and ability to trust in God’s loving care. However, doing this very thing, for Jesus, would’ve been presumptuous and representative of a path created by his own volition that resulted in him going “from the frying pan to the fire.” Yes, the LORD does call some to the foreign mission field, others to give all their possessions away … and some to quit their job before having another one. Unfortunately, I’ve seen too many sincere believers do these same things in the name of “trust” or “obedience” or the “mission of God,” when God wasn’t leading them into these choices. Instead, sincere believers made wrong choices, because they fell into the devil’s snare; resultantly, though God is capable of working these decisions for good, initially these same people faced either very choppy waters or sometimes even shipwreck.

Jesus consistently discerned the devil’s tactics and equally rebuked him at every turn, even when very appealing advice came through his close friend Peter. Wow! A close friend was capable of the same advice as the devil: an enticing way forward, minus pain and humility. Jesus’ instructions that came out of this conversation with Peter is still helpful: “If anyone would come after me, he must deny himself and take up his cross and follow me. For whoever wants to save his life will lose it, but whoever loses his life for me will find it. What good will it be for a man if he gains the whole world, yet forfeits his soul? Or what can a man give in exchange for his soul?”

Are you prone to taking advice – any advice from whomsoever – provided it promises deliverance from your disagreeable setting? Are you capable of quickly rising to defend your choice, when wisdom is cautioning you otherwise? Are you susceptible of being overly optimistic, gullible, naïve, or rarely suspicious of other people’s motives? Can you be accused of being impatient or passionate about getting “your way” or capable of doing whatever will get you out from under the pressure? Are you incapable of seeing the danger that may result from your choice? Do you do things that others might perceive you as spiritual? The choice you’re about to make, is it forcing God’s hand, when he’s asking you to wait and grow where planted (1 Cor 7:17-24)? When he’s saying, “I’ve got this; be still and know I am God. I’m actually making you lie down in what you don’t want now but will soon realize are green pastures.”

In substance, though the devil is never this blatant, he often tempts us by saying some combination of the following: “This way forward that you are contemplating will be spectacular! What a splash you’ll make for God! Don’t concern yourself with the incoming torpedoes.” “Hasn’t God said, ‘He will protect you, so that you will not strike your foot against a stone’? Aren’t you called to trust and obedience? Go for it; trust God; he’ll be pleased with your sacrifice and courage.” “Here are the Scriptures; use and manipulate them to suit your needs. Let them be a tool for the extension of your ministry, your feelings and hurt … and your desires and ego.” “Here’s a way out from your humility and pain. Take it, now, or it will be too late! Jump!”

The devil encouraged Jesus to take control of the steering wheel of his life. He wanted him to manipulatively interpret the Word, so it could be a tool for the extension of his own personal ambitions. He tempted Jesus towards a quick and easy route to “safety,” but knew better: Jesus chose, instead, to be an extension of his Father’s ways and desires; the LORD would be his Alpha and Omega. Jesus’ “way out,” in this situation, was to stand still and allow God to move on his behalf.

One time, when Jesus spoke about who would be first and who would be last in the kingdom of heaven, he did so after a very moral, religious, and rich young man had turned down an offer of a lifetime: “Come follow me!” Jesus explained what was going on by way of a parable about workers in a vineyard: the ones who were first trusted in God, period; they did things for God’s sake. The others wanted life on their terms, in a setting of their choosing, with a future they could control and with a compensation package they both agreed upon. Their mantra was, “What’s in it for me?” “What good thing must I do in order to get what you have?” J. Stott said it well,[tweet_dis]“The essence of sin is man substituting himself for God, while the essence of salvation is God substituting himself for man.”[/tweet_dis]The gospel explains that there is nothing I can do to earn God’s love and eternal treasures except to yield my life to him and allow his love to remake me into the image of God.

All of us are capable of being willful yet thinking we are spiritual. However, when tested as Jesus was above, we often fail, as did even Abraham the father of our faith. How so? Abraham followed bad advice and created irreversible circumstances that he, his family, and generations after him had to endure: per Sarah’s encouragement, he slept with her maidservant, Hagar, and Ishmael was born! All of this misfortune happened, as he wrestled with what he needed to do in order to see God’s promise of a son fulfilled in his life. Oye vey!

This life of faith, indeed, is tricky. Undeniably, [tweet_dis]The dividing line between faith and presumption can be narrow, the validity of an action not discernible until it bears fruit.[/tweet_dis]When in the midst of any major decision and aware of my frailties, I cry out with the psalmist: “I seek you with all my heart; do not let me stray.” “I am yours, LORD, protect and save me, for I seek out your words of wisdom!” “May your deeds be shown to your servants, your splendor to their children. May the favor of the Lord our God rest upon us; establish the work of our hands for us — yes, establish the work of our hands.” “O my Strength I watch for you; you, O God, are my fortress, my loving God. God will go before me!” After these prayers, I then discern, as best I know how, the godly trail forward, knowing that the LORD is sovereign enough to lead me but also the one who mercifully continues to fix my messes and work all things together for good. I patiently listen and yield myself, as best I can, to his whisper, his gentle breeze forward, his joy despite circumstances, and his peace which surpasses understanding. I rest, knowing that God is a rewarder of those who seek him! He’s the gracious, protective, and caring Father from which all goodness flows.