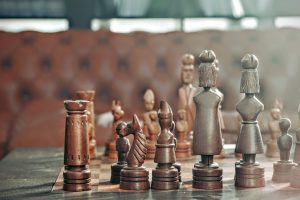 This is my fifth post about making godly choices, all based on Jesus’ wilderness temptation; this blog flows forth from the thoughts of the last one, It’s Tricky!

However, this doesn’t mean that godly choices won’t include risk and contain impending unknowns. Further, some of your decisions may even initially appear foolish:[tweet_dis]walking by faith may require you to believe in advance what will only make sense in hindsight.[/tweet_dis]If God instructs you to get into a boat – whether there is an approaching storm or he appears unaware and asleep – he’ll be with you through the journey, even if you feel like Abraham whose facts just didn’t add up while he headed to Moriah to sacrifice his son of promise. But don’t be that person, who needs to be assured of every future aspect before making a decision.[tweet_dis]Do certain fears, unknowns … or the paralysis of analysis prevent you from moving forward?[/tweet_dis]As God’s child — a person who lives by faith not sight — your choice should be a step of faith, an act of obedience, which by definition means that you will not know every imminent detail nor be fully in control of unfolding circumstances.

Yes,[tweet_dis]unstableness comes, when you lift one foot off the ground and step forward, but this is how forward progress happens.[/tweet_dis]Yes, with two feet on the ground you might feel more secure and stable. Yes, leaving a safe or familiar place isn’t easy and will involve some risk, but staying stationary, when God is beckoning you forward, is to invite even more trouble. Just make sure he is asking you to step out of the boat and then realize with Augustine’s On the Happy Life thatdecisions and actions risk error. But Augustine continues: we can’t refrain from acting or deciding; it’s not necessarily unwise to risk error. The Apostle Paul would add: Even if a decision may involve buying the truth at a great price (i.e., innocently learning things the hard way), our Father will still work it out for both his glory and your good (i.e., you growing up in him).

If God is challenging you to take that step of obedience and faith, don’t let upcoming uncertainties or the instability that change may bring prevent you from occupying God’s next place of green pastures for you. Go for it! But do so in such a way that you’ll succeed, because you’re not being reckless but rather faith-filled. As you take that first step, be circumspect, knowing that an unanticipated sideways thrust can knock you off your feet. How is this done? The starting season and ongoing process make all the difference. Let me explain.

[tweet_dis]Though faith involves risk, we can minimize our chances of making a wrong choice.[/tweet_dis]For example, how much chance we take, when we make a joint decision with someone else, depends on two things: friendship (How well do I know this person?) and credibility (What is this person’s track record and experience in this area? In my life?). Don’t enter marriage, follow a particular pastor … or make some big investment — regardless of how passionate you are about the idea — if you’re somewhat ignorant about either the person or circumstances! God’s given you a mind, use it! He wants to give you wisdom, listen! Further, if your relationship with God is that of a neophyte, he’s not going to expect from you what he would from a mature believer.

Most transitions, if we’ll seek God’s mind and ways on the matter, are also characteristically accompanied by a godly way forward along a highway of holiness. That is to say, the knowledge that this choice is pleasing to God should accompany your choice; so should the ability to move forward with peace and joy, divine favor before and after your decision, an awareness that your decision is the right and loving thing to do … and a time down the road of vindication, for “wisdom is proved right by her children.”

Additionally, don’t just seek God’s perspective during the germinal decision time. Choices have consequences. Stay especially close to the LORD while the results of your choice unfold. Unfortunately, many people make a godly choice, a faith filled one, but eventually things go awry; e.g., a couple marries in the will of God, only to divorce; by faith a pastor starts a church, only to see it closed down after a few years; someone starts a new job and two years into it, when things get difficult, they seriously question if they should quit. You get the idea. Too many of us cling earnestly to God, for an important decision, but stay loosely attached to him, as we live out the daily realities of our choice. When we do so we are careless, irresponsible … and reckless.

To start and finish big steps of faith, we need courage, tenacity, patience … and perseverance. Both God’s presence and our faith in him nourish these virtues. If we go forward but don’t stay close to God, who sustains these virtues, an opening act of faith that starts out well can easily develop into irresponsibility and eventual demise.

As sons and daughters of the Father, we’ve been birthed by God into a life of faith. Let us keep our “eyes fixed on Jesus, the author and perfecter of our faith,” so that things will not only start out correctly but there will also be fewer tendencies to doubt and stumble in the dark (the testing times of a decision) what God spoke in the light (the joyful, hopeful times of new beginnings).