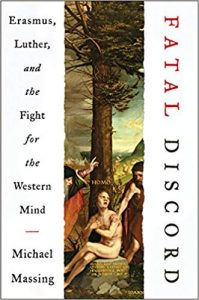 Given all that has been published on the Reformation, can one more book about it be helpful? This one is. Michael Massing is an accomplished writer: He is the former executive editor of Columbia Journalism Review, author of several celebrated books, and a fellow for both the MacArthur and Leon Levy Centers for writing. This successful journalist makes history come alive, meticulously and skillfully presenting the drama between connected lives and countries, and capturing the emerging, merging, and digressing ideas (and rulers) of the time. He intermingles two biographical accounts from sixteenth-century Europe—Erasmus of Rotterdam, Holland and Luther of Wittenberg, Germany—whose lives, he argues, have significantly impacted the Western mind, albeit in different ways. His ability to portray the Diet of Worms “as one of history’s transformative moments” may equal the best that has been written about this event (p. 461). Certain readers of this book will therefore eagerly turn its pages until they have finished it.

If you want to read this book, I have an extra copy of it to give away. My review of it is published in fall 2019 edition of Southeastern Theological Review and used here with permission.

Massing’s book is perhaps most valuable to those who start reading it from a similar place to the author’s when he began writing it. He confesses to being “raised in a middle-class Jewish neighborhood…about Christianity, I had learned nothing…the question nagged: How did a small underground sect that had splintered off from Judaism and been so fiercely persecuted by Rome manage, in the course of four centuries, to conquer the empire and replace it as Europe’s organizing force?” (pp. 823–24). This question narrowed to a smaller one with a defined answer: Why is Erasmus so little known today? “The source of his obscurity became clear: Martin Luther” (p. 824).

Massing answers the question on Erasmus’s obscurity with an end goal in mind: “Examining [Luther’s] life can help shed light on the origins of modern-day evangelicalism. And studying Erasmus’s life can help unlock the origins of modern-day humanism” (p. xv). This perspective is important for Massing, who understands that “the rivalry between Erasmus and Luther—between humanism and evangelicalism…continues to shape our world” (p. xvi); Erasmus’s tradition has carried forward in Europe, Luther’s in America (pp. xiii). This perspective, which Massing defends in the last two chapters of Fatal Discord, verifies what some may have suspected: Massing writes a tendentious, presentist view of “two enduring, fundamental, and often colliding traditions of philosophical and religious thought” in order to “restore Erasmus to his proper place in the Western tradition” (cover flap). Nonetheless, his related question is valid—on the repercussions of Erasmus’s and Luther’s ideas on Europe and America—although addressed only briefly (pp. 783–821).

Arguably Massing provides important warnings to today’s reader by way of subtle observations: “The pathway that Luther forged out of his own spiritual crisis…continues to provide a lifeline to many millions of Americans” (p. 821; e.g., salvation by faith alone, Luther-inspired individualism, and the priesthood of all believers); unlike Luther, “Erasmus failed to find a way to communicate his ideals to the masses. He wrote in Latin for a highly educated slice of society. He and his fellow humanists rarely mingled with ordinary people and had only limited knowledge of their attitudes, needs, and appetites” (p. 799). Moreover, Luther was willing to die for his ideas, Erasmus was not (p. 478). But make no mistake about Massing’s intentions; for him, Erasmus’s viewpoints receive little consideration. His ideals “deserve to be revived” (xi), by those who are “able to do a better job of making the case” than Erasmus did (p. 779).

For Reformation scholars, this book should be shorter. Massing’s ability, however, to gather a host of professionals to help him along his discoveries (e.g., Volker Leppin and Christine Helmer, both of whom are Lutheran scholars) has kept him from wandering astray and makes the work a tour de force. Though he is not an expert of the material he presents, he has mastered it. In turn, he functions as an enthusiastic travel guide for the intelligent, inquisitive person who is not a scholar of the Reformation but wants to understand it better in order to know the organizing forces behind the Western mind. This effort includes explanations of important topics (e.g., the making of the Vulgate, its reception, use, and mistakes; pp. 44–45, 92–93, 102–3, 243–56) and people (e.g., the Apostle Paul’s theology and missionary trips; pp. 222–35). His starting point for the book also causes him to empathetically “make the opaque clear, spell out the implicit” (p. 825) while not denigrating Christianity. I thus wholeheartedly recommend Fatal Discord to this type of person.