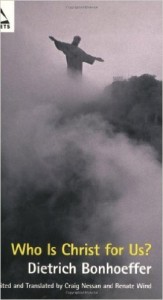 Who Is Christ for Us? by Dietrich Bonhoeffer

Dietrich Bonhoeffer thought deeply and lived bravely. As every major theologian must, he wrestled long and hard over the question, “Who is Christ for Us?” His answer informed his thoughts and formed his life. In short, for Bonhoeffer, “Christ is the center” – “a rediscovered center” and “the center of existence, history, and nature”; Christ is “the man for others” and his church “is only church when it is there for others.” These central truths affected all that he believed and how he lived.  Unless truth impacts our worldview & lifestyle, we’re like straw in the wind or a rude, clanging cymbal (Matt 6; Eph 4:14-16; 1 Cor 13:1-3; Phil 1:15).

This book is found best in the hands of pastors and church leaders, who are not acquainted with Bonhoeffer’s Christological thoughts.

Who is Christ for us? Even if we’re not theologians, this is a question that God asks each of us (Matt 16:15). Matthew’s gospel wrestles with this same question. A proper answer is affirmed by the Father (3:17) but challenged by all that is ungodly (4:3); some mock its validity (27:40) others are infuriated by the audacity of its truth claim (26:65). Knowing Christ is the key to being a disciple and a Church leader but only something received as gift. (16:16-18) The proper answer to this question should be proclaimed by every Christian, heard by every unreached person, and properly nuanced for every generation (Rom 10:9-15). Some “believers” will shade their answer to fit their own needs or perspective; however, those who are pastors, teachers, establishers … as well as elders and deacons in the body of Christ must keep this answer sure and steadfast; much depends on this, as Christ is the cornerstone of our personal faith and corporate communities of faith (Matt 16:21-23).

Bonhoeffer’s book (Who Is Christ for Us?) can help with these issues. Though it is small in size and theologically intense, it’s meant as a primer into his fuller Christological thoughts. However, if you’ve never read anything by Bonhoeffer, try instead The Cost of Discipleship or Life Together. There are also two recent biographies on him you might like: Bonhoeffer: Pastor, Martyr, Prophet, Spy or Strange Glory – A Life of Dietrich Bonhoeffer.  The former memoir, written on a popular level, does a good job explaining the cultural forces that “formed” Bonhoeffer’s thoughts and praxis (Publisher Weekly); the latter, composed by a theology professor and with a richer historical perspective, will additionally “help you grapple with the eccentric Bonhoeffer of history” (Christianity Today). Christianity Today placed The Cost of Discipleship in its list of “The 100 Most Influential Christian Books of the 20th Century” and Harper Publishers knows Life Together as “the classic exploration of Christian in Community.” I’ve read all of these books with profit and believe you can too.

However, the mature Bonhoeffer only comes forth in his Letters and Papers from Prison. In this latter book, he’s more transparent, vulnerable, and generous but also less austere; from it Bonhoeffer expands on “religionless Christianity” – a communal life centered by prayer and the Word that results in Bible informed and God empowered, efficacious actions. “If religion is only the garb in which Christianity is clothed—and this garb has looked very different in different ages—what then is religionless Christianity?” Every generation must answer this question and then contextualize their answer to their culture.

Fortress Press – by their publication of Who Is Christ for Us? – attests that Bonhoeffer’s thoughts are still important, as we too grapple with this question of the ages that this book entitles. Like most theologians, Bonhoeffer’s theology is dominated by the presence of Christ, but it’s a “‘theology in performance’ … praxis is not an after the fact consequence of his theology but the central location for theological understanding.” (6)

Bonhoeffer’s Christology played an important role throughout the rest of the 20th century, as did his answer to this question; viz., Who is Christ for us? And, don’t miss the all important emphasis in the title: the prepositional phrase “for us.” As individuals,

we ask, “Who is Christ for me?” Bonhoeffer asked “Who Is Christ for Us?” His faith insisted on Life Together.

Click to tweet
Both questions are part of the gospel. For all of us – whether we’re teachers, pastors, spouses, mechanics or parents – we all must understand the gospel on two human levels: for me, for us  (pro me, pro nobis; Latin phrases made most popular by Martin Luther).

This book has two interpretive essays as it relates to “Christ the Center”: one summarizing Bonhoeffer’s thoughts on the topic, the other America’s reception of it. Someone unfamiliar with Bonhoeffer’s extensive and deep Christological thoughts could find the introductory essays of this book its most helpful part.

The other half of the book consists of a compendium of Christological thoughts from Bonhoeffer, the latter primarily containing excerpts from Bonhoeffer’s 1933 Christology lectures but also several shorter quotes from either his other books or the Barmen Theological Declaration; a handful of on-topic-citations, from random authors, are also included. All of these quotations are certainly more helpful and contextual than tweets from @bonhoefferdaily. However, Bonhoeffer takes pages to build his points and short excerpts from his works quoted in this book are given very little contextual setting, other than where they came from, which makes this book a helpful bridge into the core of Bonhoeffer’s thoughts.

As you may know, Bonhoeffer’s 1933 Christology lectures, given when Hitler and the third Reich was “on the rise”:

Excursus:
The book “A Man in Christ“ is full of great theology about a person’s union with Christ; I’ve now read it twice. It came highly recommended to me by Dallas Willard. Chapter two is a bit academic and slow reading, but the rest of the book is a concise yet lucid reading of Christology that sticks close to the Pauline corpus; and, it’s free from the weaknesses that higher criticism can bring into this discussion, yet scholastically written by a pastor, who was also a good theologian.